Mexico exhibits its industrial and innovation strength in Hannover Messe 2018

Mexico Industry was present at Hannover Messe 2018 with the objective of promoting the competitive advantages of Mexico and our customers
Jaime Guerra Perez, Secretary of Economic Development, Competitiveness and Tourism of Coahuila (SEDECT)
Mario Chacon, head of the Global Business Promotion Unit
Great technological innovations were shown at the Hannover Messe 2018 Fair, mainly focused on Industry 4.0
Mexico is the first Latin American country that is invited to participate in the Hannover Messe Fair
Ma. Carmen Reyes, Dulce Salas and Alberto Cabello, from Laguna Advanced, a participating Coahuila company 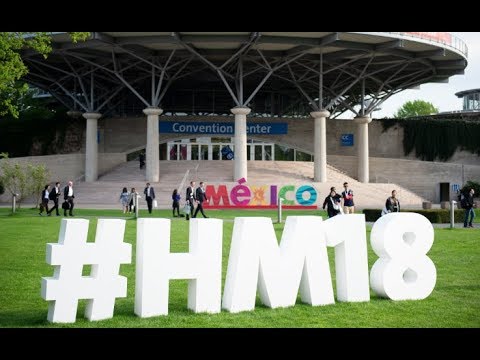 The so called Industry 4.0 or Fourth Industrial Revolution is transforming the way in which factories and plants worldwide are producing.  Before an increasingly intensive competition in the industrial sector and high quality products demand in less time, digital transformation of the industry is fundamental for companies being more productive and efficient.

That is why, the Hannover Messe Fair, the most important industrial and of innovation event internationally, has consolidated as the leading showcase in digital transformation.

Each year about 220,000 guests gather in Germany, 6,500 exhibitors and more than 5.5 million business meeting are created.  On its 2018 edition was shown how digitalized production, the internet of things, integrated systems and smart solutions are changing the way business are produced and fulfilled.

Resulted from industrial development Mexico has encouraged in the last years, it was chosen as partner country of the Hannover Messe Fair 2018.

Here, Mexico showed the world its strengths in Industry 4.0 that it has added value products and that it is a trustful destination for the arrival of investments.

According to ProMexico data, the estimated value of Industry 4.0 in Mexico is of 180 million dollars in Big Data, 201 million in collaborative robotics, and among 90 and 110 million in integrated systems.

Paulo Carreno, general director of ProMexico, said that Hannover Messe is the most important event in industry, innovation and technology matters that gathers the best of the world on Industry 4.0, automation and digitalization.

“Mexico was chosen as partner country of the Fair and this is a distinction that commits us,” he noted.

He explained that a national delegation attended the Fair which was integrated by the private sector, research and development centers, entrepreneurs, state governors and Federal Government representatives led by Enrique Pena Nieto, president of the Mexican Republic, aiming to do business with companies from more than 70 countries and attract investment projects in innovation industrial matters.

With the participation of 110 Mexican companies and a national delegation of 1,500 people approximately, Mexico presented its advantages and strengths in the areas of Industry 4.0, industrial supply, education, digitalization, energy, startups, logistics and technology, among others.

“The fact that Mexico has been an invited country is reason of pride for Mexicans, the fact that one of the most industrialized countries in the planet, Germany, leader in many manufacturing subjects, this fair is the most important in the world,” said Jaime Guerra Perez, head of the Ministry of Economic Development, Competitiveness and Tourism (SEDECT, by its Spanish initials.)

In interview for Mexico Industry from Germany, the state official was satisfied with the participation of Coahuila at the Hannover Messe Fair as it worked as a great showcase to show the competitive advantages the entity has.

“As State, it left us very happy of having being here together with ProMexico’s delegation and be one of the 18 States in touring this Fair, we have had interviews with companies interested in investing in Coahuila,” he detailed.

“For the strengths in our State is fundamental to participate in this Fair, on each one of its editions, we leave very happy and take many contacts, visits to impressive stands in subjects of information technologies, artificial intelligence,” he added.

We are seeking high technology companies; we have the automotive industry, metal-mechanic industry, aerospace and agroindustry, what make us a big and multifunctional State.  We have five regions with very different vocations and that makes us having a great range of options for investors in our five regions.

We have had more than 10 important meetings with French, German companies, also concreted visits to the State and what talks about us the most is the great amount of industry we already have.  We have 24 already confirmed projects for this year, we have a very strong dynamics and without doubt we exceed our growth goal.

The Economy secretary sees Hannover Messe 2018 as a great opportunity for the development of industry 4.0, since according to him, Germany is leader and Mexico has important advances and applied in industries such as the automotive mainly in States as Coahuila.

“I believe in this case Mexico is one of the emerging countries with the application of 4.0 we will achieve having high technology companies, in the country we have a great generation of technicians and professionals in engineering and science subjects, and that makes Mexico go from “workforce” to “mindwork,” he said.

He added that they are currently working together with organisms such as CANACINTRA on the five areas of Coahuila to be at forefront regarding industry 4.0.

“We are working with the chambers, mainly with CANACINTRA, an initiative 4.0 with international advisory, this we do it through the Chambers, because they are the direct contact with big industries, supporting with institutes that will help creating smart companies, with this new Revolution 4.0,” he underlined.

He emphasized that the main strength of the Coahuila Industry by being a leading producer and exporter State within the automotive sector.

“We have global industries with very important advances regarding the automotive industry, mainly because we are a State with 19 % of the total of engine vehicles exports nationally getting out of Coahuila,” he added.

Jochen Kockler, general director of Deutsche Messe, noted that Mexico was the fifth country with more visitors at the Fair inside its different pavilions.

Mexico is one of the strongest economies for Europe and one of the most attractive worldwide.

As Angela Merker, chancellor of Germany said, Mexico is the first commercial partner of Germany in Latin America: “the commercial volume increased to more than 20,000 million euros in 2017, what represents an increase of 24 percent.”

Germany is the third commercial partner of Mexico worldwide, only after the United States and China, and the first one among the members of the European Union.

According to data from the SE, from 2013 to 2017, the amount of German investment in Mexico added little more than 10,221 million dollars; this is, in the last five years a growth was registered of 21.6 percent.

“Germany and Mexico are, without doubt, two friend countries, partners and allies, that work together to grow and succeed in the world, and thus is credited by the recent economic exchanged,” said the president of Mexico.

FCA and Fasemex to open a plant in Coahuila

Mexico Industry was present at Hannover Messe 2018 with the objective of promoting the competitive advantages of Mexico and our customers
×
Jaime Guerra Perez, Secretary of Economic Development, Competitiveness and Tourism of Coahuila (SEDECT)
×
Mario Chacon, head of the Global Business Promotion Unit
×
Great technological innovations were shown at the Hannover Messe 2018 Fair, mainly focused on Industry 4.0
×
Mexico is the first Latin American country that is invited to participate in the Hannover Messe Fair
×
Ma. Carmen Reyes, Dulce Salas and Alberto Cabello, from Laguna Advanced, a participating Coahuila company
×