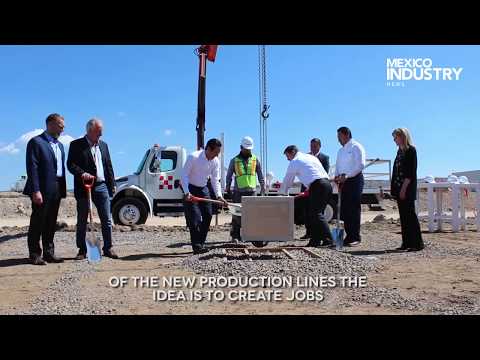 With an investment exceeding the 17 million dollars, Harsco Industrial IKG world leader for more than 100 years in the manufacturing of grating and grid made of steel, aluminum and fiberglass, placed the first stone of what will be their new plant, located in the municipality of El Marques, Queretaro.

Chad McClendon, VP and general manager of Harsco Industrial IKG, said during his intervention that this operation sets the beginning of the growth and construction of its plant and that this will have one of the best equipment in the industry.

“We are very excited about what this will be bringing in the future, we will continue working to keep leadership not only in Mexico, but also in Latin America,” he added.

The company is seeking that with this investment they will be moving their operations to this plant and take advantage of the production capability it will have.

Regarding Jose Luis Vargas, general director of Harsco Industrial IKG de Mexico, said that they will be adding a manufacturing line of an aluminum grating which is currently not made in Mexico: “moreover, we will expand our production in safety grids, a product we launched to the market almost three years ago.”

The new plant will be built on a three hectares property, of which 15 thousand square meters will be addressed to production areas.

With the growth and the implementation of the new production lines, the idea is contributing to the creation of jobs in the area.

In addition of the 150 employees the company already has, this new line will require between 50 and 20 people more.

“This is the largest investment in the history of the company, with this we achieve consolidating the company as a grid producer in Latin America,” said the general director of Harsco Industrial IKG de Mexico.

At the event were present directives of the company, as well as state and municipal authorities, among which were Francisco Dominguez Servien, governor of the State of Queretaro; Marco Antonio Del Prete Tercero, secretary of Sustainable Development; Jose Luis Aguilera Rico, secretary of Labor; Fernando Gonzalez Salinas, general coordinator of the State Commission of Infrastructure, collaborators, customers and special guests.

60 years being leaders in the market

Harsco Industrial IKG began operations in Mexico City in 1955, it was up to 1994 when they purchased a Queretaro company dedicated to the manufacturing of similar products, and then they moved their complete operation from Mexico City to Queretaro.

Currently, the plant located in the State’s capital has been operating for 46 years manufacturing industrial grids, high security grids, keeping their leadership in the Mexican market for more than 60 years.