Bosch SLP grows 1,100 % in formal jobs during the last decade 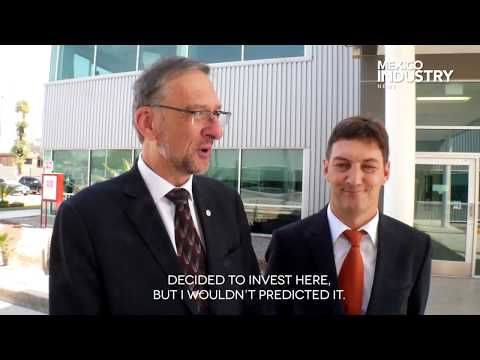 Robert Bosch San Luis Potosi plant was founded more than 40 years ago for the manufacture of automotive pieces such as speed sensors, tank valves, ignition coil and chain of command.  Nowadays it is the only site, in Mexico, dedicated to the manufacturing of fuel components.

In 2009 the company bet on San Luis Potosi and installed the production lines of the Fuel Systems Division in the plant already settled in the entity.

The company’s increase annual rate has been of 39 %, therefore they have grown 26 times during the last decade.

“We have a purpose, becoming what we have already become: the largest solutions factory launched in North America, we are very proud of this achievement, therefore for all associates working here, my congratulations and thank you very much from the bottom of my heart and good luck,” Sujit Jain, regional president of Fuel Systems of Robert Bosch North America.

Ruediger Zeitler, technical vice-president of Robert Bosch SLP, said that the Factory has won the confidence of company directors in Germany, due to the passion showed by its associates, and during the period 2014 to 2018 they received more than 25 million dollars per year.  With that they began expanding their facilities, build a new industrial building, a Logistics Center, the Center for Engineering Research, Training Center, dining area and other new areas such as Technical Training Center for Dual Education.

“We can proudly say that we are today one of the most important plants within the business of our Bosh division worldwide, not only in production terms, also in workers and families benefited from it,” said Ruediger Zeitler.

Meanwhile Gunter Daut, commercial vice-president of Robert Bosch SLP said that the company that began as Bendix, in 1996 acquired Robert Bosch on its Brakes Division, and as of 2009 it transformed into Fuel Systems Division, which today is one of the most complete plants.

“We celebrated the anniversary of Fuel Systems Powertrain Solutions due to the merge we had last year with Diesel Systems, another Robert Bosch division.  The two divisions together worldwide have an invoicing of more than 20 billion dollars, more than 400 billion pesos,” he said.

Meanwhile Hans Hoffman, executive vice-president of Robert Bosch Powertrain Solutions Division, said that when he visited San Luis Potosi for the first time, leave impressed by the growth of the industrial area, the quality of its education and universities, in addition of the passion and work of the people of SLP.

“I am committed to have our plan continue the important role it has in economy and San Luis Potosi industry.  After 10 years, I confirm settling the Fuel Systems plant here was a correct decision, let’s go for more!” he said.

One of the participants in the tenth anniversary ceremony was Juan Manuel Carreras, governor of the State, who said the company is a reason of pride for San Luis Potosi, not only due to its internal achievements, but also for getting involve in society and support state DIF programs.

“Bosch history is marvelous, we are proud of the internal achievement of objectives, and because we are settling a world research platform here, in addition of their effort and sponsorship to sports event, cultural and recreational,” said Carreras Lopez.

Victor Hugo Puente, human resources director of Robert Bosch, said that they will increase their workforce to 300 people more this year.  Regarding “Dual Formation” he said that they are the first German company in implementing in the SLP; since 2001 to date 11 generations have graduated this program and, they have 48 apprentices from the Universidad Tecnologica de San Luis Potosi, are studying it.

Youngsters graduate certified as leader in professional formation by IHK, and from the total of participants, about 20 % are women.

During 2016 Robert Bosch San Luis Potosi fulfilled an investment of 85 million dollars to expand plant’s facilities, construction that will be ended by the end of 2019.

Additionally, the plant was recognized with the award “San Luis Potosi Quality Plus Award,” at the beginning of 2019, for being one of the companies fulfilling the highest standards in projects development and in products and services offer to its community.

Hermann Bohrer, will retire from BMW Group after more than four decades of collaboration